skip to main | skip to sidebar

Somalia And Other Hells On Earth 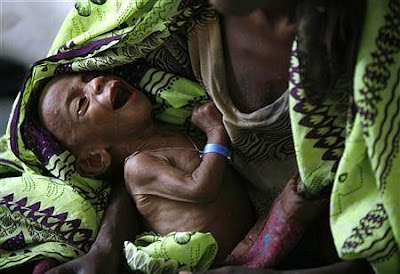 Somalia is starving, yet again. It's the Somalis' turn, after the Haitians, the Ethiopians, etc.. The reasons for any human disaster are common and well known:

In the first case, most people are sympathetic and are quite willing to give money, food, clothes, etc.. out of solidarity and compassion. In the second case, however, there is less sympathy, especially if they have been hearing the same appeals for charity over and over again. Compassion fatigue and desillusion over misuses of donations set in. Cynicism is unavoidable. Here are some answers (in parentheses) to frequently asked questions about the Somalia tragedy:

. The drought was foreseen, why wasn't anything done to prevent the hardship? (There is presently no functional government in Somalia).
. Local rebel forces are preventing humanitarian aid to reach the starving populations, so why help at all? (Some forms of help can still reach them, such as medical services provided by Medecins sans frontières. Some areas are not controlled by the conflicting armed groups and refugees there can be assisted).
. Why do they keep having children if they cannot feed them? (Most of the population are illiterate and uneducated. There is no functional central government. Women have no say in the mostly muslim population: they have no control over their reproductive functions and no access to contraceptives).
. Why don't the other oil rich muslim countries help the Somalis? Why is it always up to the Western countries? (Other muslim countries do send help. The Red Crescent is cooperating and coordinationg their assistance with the UN and/or other international non-governmental organizations. But the neighbouring muslim countries are looking at the situation in Somalia as a political problem, and not so much as a humanitarian problem).

There are of course many more reasons one can think of to explain the origins of the suffering of the Somali population*. Somalia has the misfortune of not having oil under its soil, so it doesn't present much interest to you-know-which-country**. Same fate as Tibet, I guess. For us, simple citizens of the world, however, the main question would be: Should we help? and the answer is: Of course, we have to help. If you see another human being starving, or even any sentient being starving or suffering, wouldn't your first instinct be to help?

As for me, I am sending my donations to organizations that I trust, i.e. Unicef (https://secure.unicef.ca/portal/SmartDefault.aspx?at=1209&gclid=CO3Ur_iPrKoCFcTe4AodMhlGXQ) and Médecins sans frontières/Doctors without Borders (http://www.msf.ca/?gclid=CLrS5puQrKoCFQLf4AodCD7uXg). You may have your own favorite charities, so go ahead and donate to them. DONATE!!!! NOW!!! 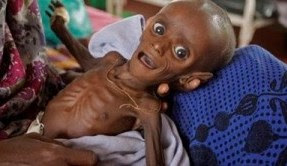 * If you want to know more about the history of the Somalian plight, this is one of many sites explaining how Somalia used to be a prosperous food-exporting country: http://antemedius.com/content/pirates-somalian

** Actually, there could be oil waiting to be stolen. According to Wikipedia: "Due to its proximity to the oil-rich Gulf Arab states such as Saudi Arabia and Yemen, the nation is also believed to contain substantial unexploited reserves of oil. A survey of Northeast Africa by the World Bank and U.N. ranked Somalia second only to Sudan as the top prospective producer. American, Australian and Chinese oil companies, in particular, are excited about the prospect of finding petroleum and other natural resources in the country. An oil group listed in Sydney, Range Resources, anticipates that the Puntland province in the north has the potential to produce 5 billion barrels (790×10^6 m3) to 10 billion barrels (1.6×10^9 m3) of oil. As a result of these developments, the Somali Petroleum Company was created by the federal government."
Posted by Buddhist with an attitude at 12:19 p.m. 1 comment:

Posted by Buddhist with an attitude at 5:18 p.m. No comments:

With apologies to my caucasian friends, may they live long and prosper.

Posted by Buddhist with an attitude at 12:57 a.m. No comments:

My Son, The Computer Fixer 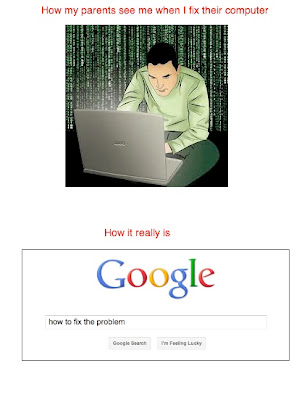 Posted by Buddhist with an attitude at 12:03 p.m. No comments:

Posted by Buddhist with an attitude at 9:29 a.m. No comments: 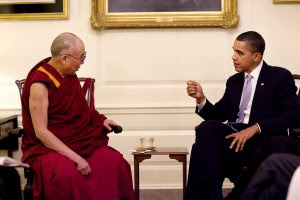 Dalai Lama to Obama: "The Nobel Committee sent me. They want their Peace Prize back."

(from The Crawdad Hole http://crayfisher.wordpress.com/)

Posted by Buddhist with an attitude at 4:41 p.m. No comments:

Posted by Buddhist with an attitude at 6:51 p.m. 3 comments:

Buddhist with an attitude
I'm fat. I like red shoes.